(TBS) In the first months of 2011, the economy in Vietnam in specific and the world in general was hit hard by the post economic crisis and natural disasters. According to the economic expert’s viewpoint, the economic conditions in May and the first 5 months of the year 2011 saw many significant changes, yet there have been many difficulties and challenges due to rising price of domestic and international goods. Besides, the business in other sectors was badly affected by high input cost that led to rising price, which affected the product consumption. 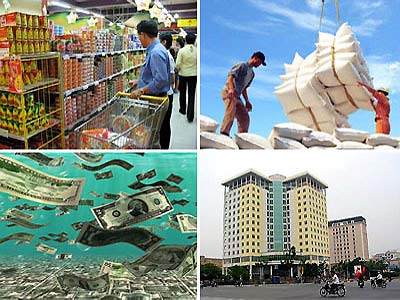 Especially in the import and export of construction materials, some key cement export markets such as Japan, Bangladesh or Africa were hit hard by natural disasters, economic downturn or political instability.

Facing such real challenges requires The Vissai Group’s export and import leaders to strive to find and approach new markets.

In March 2011, the export contract of more than 500,000 tons of cement to Swiss customers was signed, which was the result of the tireless efforts of the people working in export for The Vissai but also posed many difficulties to be overcome.

First, the contract time was also the time that a series of input fuel was agreed to increase the price at the market price by the government, leading to the domino effect that transportation costs and a variety of other costs increased.

Second, the heat of competition was increasing when there were more cement production and consumption units participating in the export market leading to difficult negotiation of price.

Facing such difficulties, The Vissai management simultaneously performed multiple solutions, in which actively negotiating with the transport units to have the most reasonable cost as well as ensuring the transport of goods in accordance with delivery schedule was of top priority.

To direct the production units to actively seek solutions to improve techniques and ensure quality standards but to save energy and input costs, minimize unnecessary costs to focus resources on market works.

“After implementing a series of drastic measures, the conduction of exporting 60 thousand tons of cement in June has reached more than 50% of the volume. Employees from related departments of the Group are trying their best to complete before July 5 in case of no big problems”, said Mr. Nguyen Tien Dat, The Vissai’s Deputy General Director in charge of International Market.

The first day of June came to The Vissai’s officers and staffs with relatively favorable information. As planned, the Korean MV A HANDY vessel with tonnage of 3.3 thousands would dock and line up at Cai Lan port on 10 June 2011. It was expected that with the efforts and the rational calculation of The Vissai’s leadership would bring success to the cement export plans as well as business plans in the remaining months of 2011, significantly contributing to the local economy and the development of the whole industry.

A takeover deal in the cement sector

Nearly 13 billion supported to "For the poor fund"