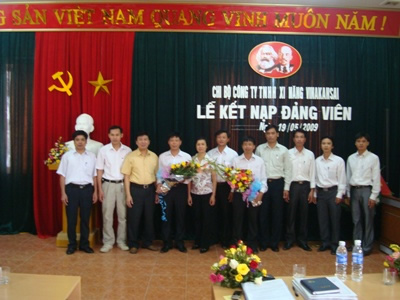 The previous Decision No. 393/QD-DU dated 12 May 2009 by the Party Committee of the business sector on the establishment of The Vissai Cement Party Committee on the basis of VINAKANSAI Cement Limited Company Party Branch includes 05 Party branches. The Party Executive Committee consists of 07 comrades with Mr. Dinh Quoc Quyen as Party Secretary and Mr. Dinh Xuan Ton as Deputy Secretary of Party Committee.

The leaders in the admission ceremony of new Party members

“Decision No. 393/QD-DU confirms the growth of the Party base in the enterprise and represents the leadership of the Party which has always existed in every group activities environment. The Party’s leadership has always been effectively applied in the field of economic construction and management, both in macroeconomics and microeconomics. That the Party organization is maintained with rapid growth in enterprise, especially non-state enterprise will be the model for the Provincial Party Committee to further develop the Party organizations in the remaining enterprises in the province”, said Mr. Dinh Ngoc Ha, Party Committee Secretary of the business sector at the ceremony.

To deal with difficulties for cement production