According to the Ministry of Construction, Vietnam has reaped USD 156.39 million from exports of cement in the first eight months of this year, reaching 46.2 % of the country’s annual target. The Ministry had earlier asked the cement companies, including Chinfon Cement Company, Nghi Son Cement Company and Phuc Son Cement Company to seek for more output markets in the context of excessive cement in the country. However, Vietnamese cement manufacturers often find it difficult to boost export  due to lack of competitiveness and poor infrastructure as well as high transportation costs. There is competition in the target export regions such as Southeast Asia and South Asia while Thailand, China, Indonesia and Taiwan where they themselves are pushing their products in such highly competitive markets. Moreover, unlike their competitors, Vietnamese new production lines have not been depreciated, leaving the domestic cement manufacturers with higher production costs. In fact, Vietnamese cement manufacturers have to pay high interest rates of 20-21 % while interest rates in other countries are much lower, which significantly reduces competitiveness. 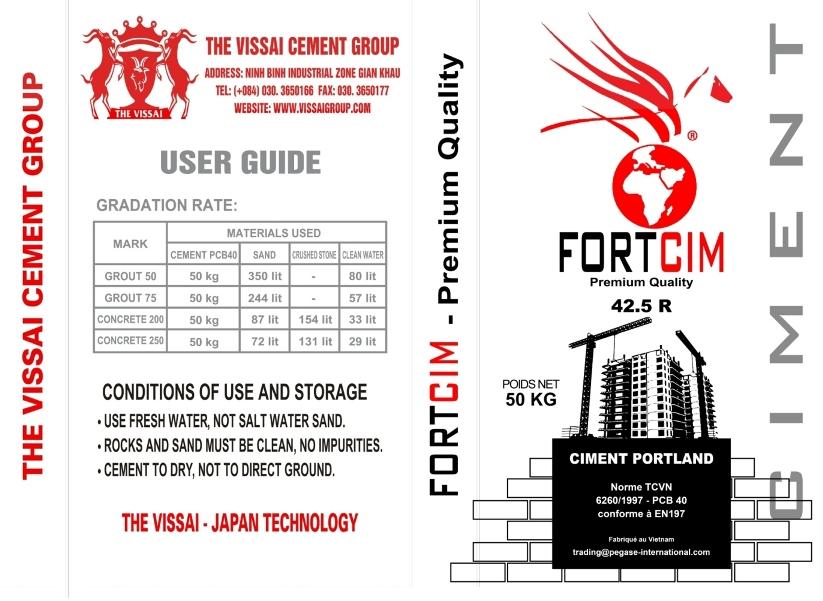 The Vissai’s pack sample to export to European market

Poor infrastructure also goes against Vietnamese cement industry as exporting cement to distant markets requires large vessels with minimum tonnage of 50,000 tons. However, Vietnam does not have any port capable of receiving such vessels and companies have to use smaller types to transport cement to the mooring. “It will take at least a month to finish loading 50,000 tons of cement on board if following this way, another one month to transport cement to Africa, and then another one month to transport cement from vessels to the construction sites”, said Director of a cement company. He also noted that cement products must be used within 6 months from the manufacturing date.

Vietnamese cement manufacturers have been struggling to find new export markets to sell the excess cement. At the end of 2010, Vietnam exported nearly 1 million of cement and clinker including Vietnam Cement Corporation (Vicem) and Vissai Ninh Binh. In the first eight months of the year, Vietnam has exported 2.8 million of cement and clinker, the highest export ever in history. Vissai Ninh Binh and Vicem are still the two largest exporters. Despite these initial encouraging achievements, the Vicem’s subsidiaries still believe that cement export is an impossible mission.

“The biggest obstacle for Vietnamese cement products is not the lack of export markets but the lack of competitiveness and good infrastructure conditions”, said Director of a cement company. The biggest problem for cement exporters is high transportation cost. The most ideal export markets for Vietnamese cement products are Southeast Asia and South Asia countries, which allows minimizing transportation cost.

However, such countries are also the aim of the other manufacturers in the region including Thailand, China, Indonesia and Taiwan. Vietnamese products are at a disadvantage because manufacturers have to pay an interest of 20% to 21 %. Meanwhile, interest rate in other countries in the region is only a few percent. In the first eight months of 2011, Vissai Ninh Binh has exported 1.2 million tons of clinker to Bangladesh via a Hong Kong company. Whereas, Vicem tried to sell cement and clinker through the neighboring countries such as Laos and Cambodia. In order to compete with Thai products, Vietnamese enterprises have been exporting cement at a low price of 55 dollars/ton, or only at 60-65 % of domestic retail price. Moreover, while the Middle East, Africa and North America are considered our potential markets, only tens of thousands of tons have been exported from Vietnam due to limited transport and ports.

Nearly 13 billion supported to "For the poor fund"