A vast complex of houses and spiritual structures from the 54 ethnic groups from all over Viet Nam is still a work-in-progress by the State. The tribal Disneyland, known as the Viet Nam National Village for Ethnic Culture and Tourism, is situated in Dong Mo District. It is far larger than the complex built for the Museum of Ethnology much closer to the city.

Putting the final touches to a tray of offerings on grassland near a newly built stilt house, the shaman from a village dedicated to the Ta Oi ethnic group is ready to begin worship to clear any bad spirits away from the dwelling and provide blessings for the future. The villagers are from central Quang Tri’s Ta Rut Commune in Dakrong District.

Surrounding the shaman, younger men and women dance, sing and play gongs to provide the right atmosphere. Their activities quickly draw a crowd of curious people. The shaman then leads the procession around the new house. He sprinkles pig’s blood on every corner, every wooden pillar, and bamboo grove where ghosts and evil spirits may hide. As in a real village, the furniture can then be moved in.

“I found the ritual is quite interesting,” said a Thai tourist named May, “I have never been to the central highlands of Viet Nam or seen such a ceremony. It’s a good idea to invite them here to practise their special rituals.”

“This is the first time I have seen such homes and even tombs,” she said. “I think the culture village is more lively than a museum of ethnology as it has hills and a lake to display the many ethnic groups. It’s like a mini Viet Nam.”

According to Lam Van Khang, deputy general director of the village, more than 1,500ha of land has been allocated to finish the construction plan of a comprehensive tourist site, including a sports and recreational centre (125ha), tourism service centre (139ha); a centre for World Heritage site miniatures (47ha), a water park (342ha) – and a natural lake (600ha).

Located just 40km from the heart of the capital and easily accessed by the Lang-Hoa Lac expressway, the village is open throughout the week. For those interested, the village can provide food and accommodation for up to 300 guests – but bookings are essential.

“As the project is still underway,” Khang told Viet Nam News, “The village has not arranged any packages with travel agencies. Last year, we invited more than 100 big travel agencies to a conference to gather opinions on introducing the village to the world as a tourist destination.

“Now, the management board has called for private sponsors to invest in transport within the village, such as electric cars, boats, horse-drawn carriages and bicycles. We are also calling for food and drink services so that by next March the village can offer good basic tourism facilities and hopefully cover running expenses without using so much of the State budget,” he said.

One of the biggest drawcards is likely to be a Khmer Buddhist pagoda just finished after three years’ work. The pagoda, built on almost a hectare of land, follows the original design of K’Leang Pagoda, one of the oldest pagodas in the Cuu Long (Mekong) Delta. The complex contains a house for keeping the ghe ngo (traditional wooden boats) and a big lake for racing them at the correct festival time.

Craftsman Ly Let, who directed the design and construction of the pagoda, said the main building runs in an east-west direction in line with the path of the sun. It is surrounded with many round pillars decorated with a sculpture of Krud, a holy half bird and half man holding up the roof.

Naga sculptures are placed along corridors and around the roof. The multi-headed snake is connected with water in Hindu mythology. Buddhist paintings line the corridors of the main temple building. Almost all free space is decorated with carved sculptures.

Venerable Tran Van Luong, who has just been appointed as head monk, said Khmer pagodas were not only places to worship Buddha, they also served as schools for children and as cultural centres for the village.

A complex of Cham towers from central Viet Nam is another attraction at the village. The beautiful structures, completed last year, follow the design of the Pokloogarai towers in Phan Rang City in Ninh Thuan Province built at the end of the 13th and early 14th centuries.

The complex covers 4,000sq.m. The main tower (Kalan) is 20m in height, a gate tower (Gopura) is 8m high – and a fire tower (Kosaghra) 9m. Red clay bricks are the main building material. They are glued together with special tree resin, called Dau Ray, found near the famed My Son Sanctuary in Quang Nam Province. 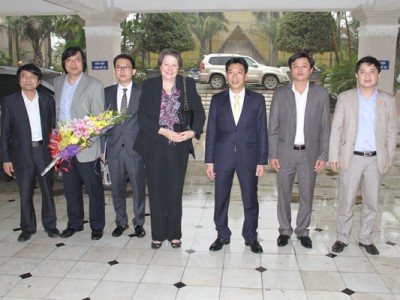