Non Nuoc, or Duc Thuy Son mountain is located right on the confluence between Van River and Day River, as an outpost in the eastern gateway of Ninh Binh City. The entrance to the top of Non Nuoc mountain goes through 72 stone levels which are divided into 5 levels. The mountain top is relatively flat and convenient for visitors to rest and have sightseeing. 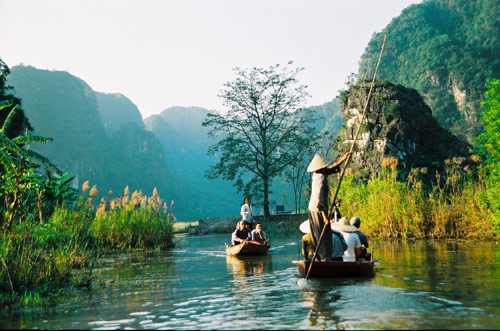 Along the mountain, there are Non Nuoc Pagoda and a temple worshipping famous scholar Truong Han Sieu whose courtesy name are Thang Phu and Don Tau in Tran dynasty. The Van River estuary surrounds on the three sides of Duc Thuy mountain while only the other side is connected to the mainland. Thousands of years ago, the foothill was eroded by sea waves forming a wide stone arch which covered a corner in Van River. There are hundreds of poems by famous scholars like Truong Han Sieu, Le Thanh Tong, Le Hien Tong, Thieu Tri, Tu Duc, Pham Su Manh, Tan Da, etc.

The mountain and river are beautiful like a poem

On the mountain, under the river

Non Nuoc is a beautiful mountain in Ninh Binh city, which used to be considered as estuary with fairy mountain in Nguyen Trai’s poem. Standing on the mountain, visitors can have a paranomic view of the two bridges over Day River and a part of Ninh Binh city center.

Truong Han Sieu was the first person to detect and exploit the beauty of Non Nuoc. He named the mountain as Duc Thuy Son and was the first one to leave an autograph of a poem so that other poets who came here for sightseeing can make many other poems carved in stone. Temple Truong Han Sieu and Non Nuoc pagoda were built into the foothills. Such area is now known as Thuy Son’s park in Ninh Binh city.

Non Nuoc mountain is located in a key location, obstructing the access to the confluence of Day River, Van River, Highway 10 and many important traffic roads, which explains why the enemy troops always tried to approach such position during the war. Along the way up to the mountain, there are still the locots with traces of wartime bombing.

In the past, the mountain is an ancient outpost watchtower that protected Hoa Lu citadel. Especially, this is the place to witness an important transfer in the country’s history when under the mountain, Queen Duong Van Nga handed over the imperial mantle and waited for the day when Le Hoan army general came back after expelling the first Song invaders, opening a resounding victory in the national history.

Thuy Son mountain is also a hero song of revolutionary heroism with an example of Luong Van Tuy, a young communist who sacrificed himself to overcome bombing to put the revolutionary flag on the top of the mountain (1930) or Giap Van Khuong, an army hero who bravely escaped from the encirclement of the enemy in the battle against French on 30 May 1951.

Coming to Duc Thuy, visitors can visit Han Nom poetry museum, a lively and rich poetic museum from the creator. In the Tran dynasty, Truong Han Sieu, a son of Ninh Binh was the first one to set up such poetic museum and gave birth to the tradition of poetry carved into the rock. His first poem to be carved into the cliff was Duc Thuy mountain praising the beauty of the mountain and his desire to return to his homeland thanks to the charm of Duc Thuy mountain:

A long time ago, one still goes

No covering from the top floor

Further away from life

A spaceful land and lake

When to come back here

Until Le Dynasty, King Le Thanh Tong when returning from Vinh Lang (Thanh Hoa) also stopped by Duc Thuy mountain. Being amazed by the natural beauty and poems on the cliff, he made Duc Thuy poem carved in the west of the overhang mountain on the east. King Tu Duc in Nguyen Dynasty also carve a poem on the cliff once visiting here. It can be said that no mountain in our country is attached to such many Vietnamese feudal dynasties like Duc Thuy.

Duc Thuy mountain was so famous that many poets came here and carve rows of poem such as Ngo Thi Si, Ngo Thi Nham, Nguyen Huy Oanh, Bui Van Di, Pham Ba Huyen, etc. The mountain has attracted many artists. Duc Thuy is a poetic mountain, and unique poetry in our country, containing interesting poems in the past seven centuries.

The mountain was carved with over 40 poems, which were the invaluable message handed down for future generations, the wonders that adorned and decorated the mountain to be somewhat more ancient, dignified and intellectual. It was also the cultural value representing talent, creativity, sophisticated technique of the ancient stone carving artisans cultural creative talent, technical sophistication, gifted artisans ancient stone carvings. Regardless of time, wind or mist, rain or shine, the Han and Nom characters, whatever big or small, has been carved on the cliff and not dimmed yet. As the sculptures for the complete visual beauty of the mountain, it has attracted many visitors who have been amazed by the beautiful mountain and river and hesitated to say goodbye to such beauty.

From the top of the mountain, the blue skies are so beautiful that make our heart settle down in the wind and sweep away the worries of daily life.

Thuy Son has shown the testament to thousands years of national history and culture. The remaining Vietnamese cultural elites here have tremendous value on the historical education. It is believed that visitors will feel useful, happy and ethnic proud when visiting the historical site Duc Thuy Son.

(Collected and compiled by VHN)

Ninh Binh: Budget revenue a year to look back

Armed Forces generals who were born in Ninh Binh