Towards the 1000th anniversary of Thang Long, vissaigroup.com would like to introduce the series of articles on the ancient capital Hoa Lu and Ninh Binh nowadays so that readers can somewhat understand about the land with thousands years of civilization, also the capital of the Dai Co Viet in a proud historical stage of Vietnam.

Ancient Hoa Lu, the first capital of the centralized feudal state of Vietnam was established more than 10 centuries ago and is now located in Truong Yen Commune, Hoa Lu District, Ninh Binh Province, about 100 km away from Hanoi.

In 968, Dinh Bo Linh defeated the 12 scattered warlords for national reunification, then became emperor in Hoa Lu capital, which existed for 42 years (968-1010) in which the first 12 years were reigned by Dinh Dynasty (Ding Bo Linh ascended the throne as emperor Dinh Tien Hoang brand and then named the country as Dai Co Viet) and the next 29 years were reigned by Le dynasty (the first king was Le Hoan or Emperor Le Dai Hanh).

Over thousands of years ago, the ancient capital of Hoa Lu was truly majestic and splendid with rolling hills surround the capital ring like a geomantic plate, meandering Hoang Long river, Nho Quan and Gia Vien field full of natural deep moats creating favorable conditions for military.
Hoa Lu ancient capital was about 300 hectares in width, including The External Citadel, The Internal Citadel and The South Citadel which were surrounded by a series of arc rocks, majestic landscapes while the space between the mountain slopes were sealed by earthen bricks with the citadel foot of 8 to 10 meters in strikeout.

The External Citadel was about 140 hectares in width and located in the rural Yen Thanh, Truong Yen Commune. This is the main palace with Dinh Temple and Le Temple as the main center, also the place where King Dinh Tien Hoang flagged the nation building. In front of the palace was Ma Yen mountain in which Legend of King Dinh selected to obstruct the access.

The Internal Citadel was located in the rural Chi Phong, Truong Yen Commune, also known as Thu Nhi Commune, the place of children and maids in the palace.

The South Citadel (located in the South, opposite and connected to the External Citadel) was surrounded with high mountains surrounding, obstructing the access to the South of the imperial city and protecting from the back.  From here, it could be easily to withdraw by waterway.

From the East of the imperial city, there was the Flag pole mountain, a place with the national flag of Dai Viet, rapids tower  where King Dinh defeated the marines, Tien Cave which stored the national wealth and Thien Ton Cave – Hoa Lu outposts, also the cave trapping tigers, leopards and sinners. 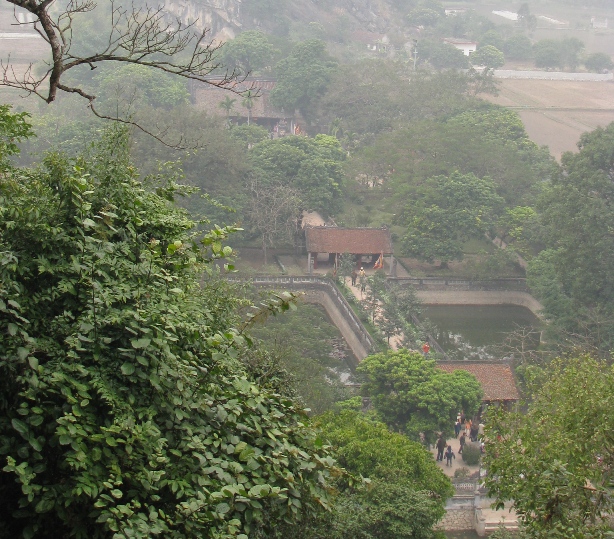 In the dynasty of King Le Hoan, there were more splendid palaces such as Bach Thao Thien Tue palace, Phong Luu palace in the East, Vinh Hoa palace in the West, Bong Lai palace in the left, Cuc Lac palace in the right, Hoa Van gazebo, Truong Xuan and Long Boc palace with silver tiles.

By 1010 Ly Thai To moved the capital from Hoa Lu to Thang Long and Hoa Lu officially became the ancient capital.
Over more than 10 centuries, the historical relics in Hoa Lu ancient capital have mostly been destroyed or ruined. Nowadays, there are only the remaining King Dinh Temple and King Le Temple built in the seventeenth century.

King Dinh Temple was built in the style of “inner force overseas” which was based on the majestic ancient palace with the Ngo Mon Gate, lotus pond, rockery, flower gardens, outer and inner fringes together with three sanctum, burning incense and harem. In the sanctum, there was “Long Sang” made ​​of lively monolithic stone. It was followed by the burning of incense to worship the Founding Fathers and meritorious officials. Finally, there were the statues of King Dinh Tien Hoang with his sons in the harem. The carvings on stones and wood with the themes of dragon, clouds, fairies, flowers, etc. were sophisticatedly decorated in the temples..

In the Hoa Lu relic area, there are some quite beautiful pagodas such as Ngan Xuyen Pagoda (near the foothills of Ma Yen), Nhat Tru Pagoda (approximately 200 meters away from King Le temple) that attract many tourists for incense offering and sightseeing.

Also, what attracts tourists visiting favorite relics of Hoa Lu ancient capital is to meet the very interesting tour guides. The story of the reign of King Dinh and King Le are told in a simple but profound way, especially with their proud and respect against the ancestors.
Nowadays, on the ancient palace, there are two temples in a distance up to 500 meters. One temple worships Dinh Tien Hoang while the other worships Le Dai Hanh. The two temples worshipping the two emperors are so close that they are known as Dinh-Le Temple.

Each year, the traditional festival of Hoa Lu ancient capital is held in spring, the early March of Lunar year at the historical relic area of Hoa Lu to commemorate the merits of the historical characters such as King Dinh Tien Hoang and King Le Dai Hanh. The festival was formerly known as Truong Yen Festival or Reed Festival.

With regards to Truong Yen festival, it is often said that:

“For those who are the first offspring of dragon

Water Communion Ceremony: The ceremony starts with the Water communion when groups of people depart from King Dinh Temple to Long Dinh where there is a jar for holding holy water, then stop to take water into the jar and bring it back to the temple. The communion is sophisticatedly prepared. Before the opening ceremony, a big bamboo tree is selected. On the top of the tree, there is a yellow banner with mantra, the content of which shows deep gratitude of people and young generations to the golden dragon that saved Emperor Dinh in such river. May the river god keep the river cool and gentle, supporting people to get away from evil. The procession is led by pairs of people bringing the five-color flag of all kinds, followed by the octet orchestra and drums. Next, there is a big eight pole palanquin with the incense carried by eight young men in the soldier clothing, followed by the central or local guests. Then the maidens carry the offering in the canopy eight pole palanquins. The behind groups of people are the elderly, women sacrifice team far and wide, people and tourists.

Offering ritual: Right after the procession returns to the central stage of festival, the ritual opening will take place at the alter of the relic area. After the opening speech, there are Hoa Lu drum band and performance recreating important historical events in the old ancient capital Hoa Lu such as the events of Dinh Bo Linh and Le Hoan being crowned emperors, defeating Tong enemy, moving the capital to Thang Long and ending up flying dragon until the end of the opening this morning. The offering ritual is then conducted both day and night in Dinh Temple and Le Temple, praising the merit to the two kings. After that, others will burn incense to commemorate the religious worship statue as well as show gratitude to the ancient sculptures and architecture. Joining the ritual are many other groups in the region.

In the festival, there are interesting folk games such as reed wood manoeuvre, rowing, stick dancing, human chess, word builder, con throwing, rowing rhythm singing contest, wrestling, Chinese characters, etc. Basically, the games in the Hoa Lu ancient capital are similar to ones in Vietnamese folk festival. There are some typical festival games such as:

Reed wood manoeuvre is a folk game re-expressing the rehearsal and training of the young hero Dinh Bo Linh and word pulling.

Participating in the Reed wood manoeuvre are 60 teenagers aged 13 to 15 years. The most handsome boy is selected to act as Dinh Bo Linh, wearing a straw hat, holding a bulbul with yellow and purple canopies, standing in the two sides to sing and re-express King Dinh in the reed wood manoeuvre. The festival represents the will of Dinh Bo Linh and the whole army.

Hoa Lu beauty contest: From 2005 onwards, Ninh Binh has decided to hold the Hoa Lu beauty contest on the festival occasion, a part of the Vietnam ancient capital beauty contest. The qualifiers took place earlier and the final will take place at Hoa Lu festival stage.
Cheo singing contest: As the possible breeding ground for cheo theater art, on the Hoa Lu festival occasion, the cheo singing contest takes place with the participation of many individuals and local art trouples. It is the Hanoi cheo trouple that undertakes the capital moving and Thang Long drum festival. 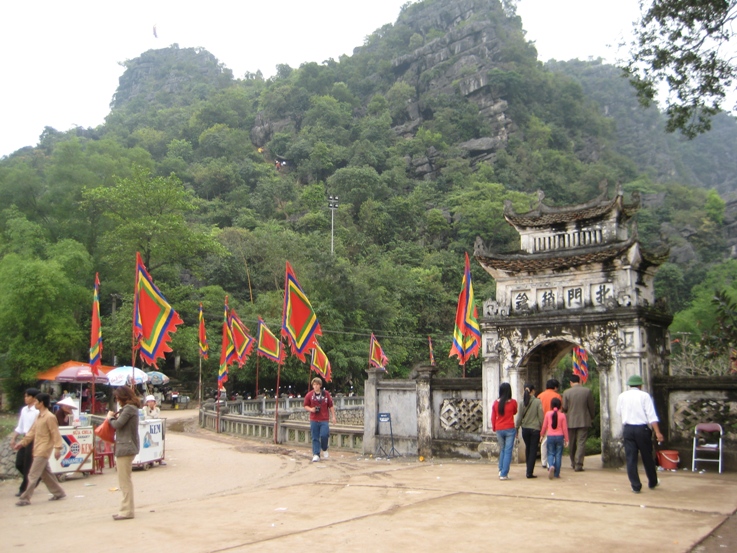 Visiting the historical Hoa Lu is a good chance to admire the architectural works, the majestic beauty of the entire monument, marking the glorious period of expanding a independent and sovereign Dai Co Viet. Participation in the festival is a good way to immerse ourselves in the history of civilized land which used to be the capital in the thousand year history of the heroic people of Vietnam.

Ninh Binh Industry and Trade with solutions on promoting the production, business and export