The low training quality, the lack of students and the huge bank debts that schools have incurred–after throwing money into land and investment deals, would all drive a lot of universities to death. 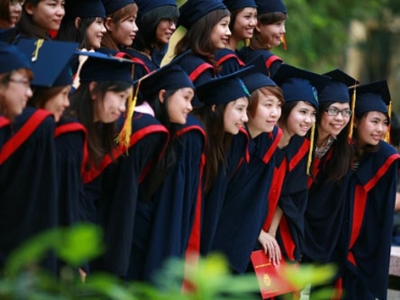 Universities have been told to submit reports about the fulfillment of their enrolment plans. The Ministry of Education and Training (MOET) has promised to think of feasible solutions to help schools enroll enough students.

On November 15, universities began submitting their reports on the enrolment plan implementation to the Ministry of Education and Training. The ministry promised to think of specific solutions for the 20 schools which find it difficult to enroll students, according to Van Dinh Ung from the non-state owned Universities and Junior Colleges.

However, by the end of November, some schools still could not find the way out. They are believed to be dissolved sooner or later due to the current education management policies.

The Bac Ha International University could enroll only 100 students, while it needed 600. Another non-state owned school in Ha Nam province could find just over 100 students.

At first, 300-400 students registered to study at the university. However, they later left the school after realizing that there were too few students and lecturers in such a large school. It is believed to be dissolved soon.

Also according to Ung, the education ministry would have to release a legal document on the implementation of the Resolution 8 on giving autonomy to universities.

“Autonomy” would mean that schools have the right to set up their enrolment plans based on their standards and requirements, while they would not be intervened by the education ministry.

If so, the current worry about the lack of students will no longer exist, because schools can decide themselves who to enroll.

Before the 2013 enrolment season kicked off, MOET stated that it would set up the floor marks with a new method, which would help non-state owned schools enroll enough students.

The floor marks are the minimum marks students must get from the national university entrance exams to be eligible for registering studies at any universities in Vietnam.

However, 20 schools still had reportedly not enrolled enough students by the end of November.

According to Dang Huu, President of the Bac Ha International University, MOET estimated that the schools would have more than 1 million students having adequate marks to enroll.

However, Huu said that the estimate proves to be unreasonable, if noting that only 800,000 students finished high schools in 2013.

Huu also thinks that even if MOET gives a nod to the plan to organize the spring enrolment season, schools would still not be able to fine enough students.  Those who failed the 2013 national university entrance exams, have gone to vocational schools, junior colleges or have reviewed for exams once again.

An education expert has warned that the MOET’s plan to have 40 percent of students to be trained by non-state owned universities by 2015 may fail completely.