Gustavo of V. Ninh Binh was the best attacker of của V.NB in V. League with 14 goals in 16 matches and helped V. Ninh Binh hold a firm position. 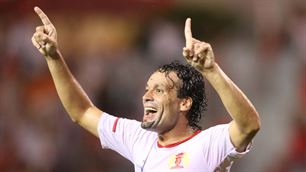 V. Ninh Binh was ranked fourth thanks to great contribution of Gustavo

Merlo, Evaldo or Samson was mentioned by many goals. But Gustavo of V. Ninh Binh was an attacker of the best scoring performance in V. League with 14 goals in 16 match and and helped V. Ninh Binh be ranked fourth in the final V. League table. “Clown”, “madman”, “monster” and “mobile beer belly” … were nicknames that V. NB fans called Gustavo.

Upon playing football for V. Ninh Binh as well as Long An Team, his personality was clearly expressed. Because of his “elegant pleasures”, Gustavo was internally disciplined by Coach Nguyen Van Sy as a reserve football player. Fortunately to this Brasilian attacker, V. Ninh Binh lacked players in the home game and Gustavo was registered to play football again. Immediately, he became the goose that laid the golden eggs for V. Ninh Binh with valuable goals. Gustavo made all surprised. With 1,222 minutes of 16 matches, Gustavo scored 14 goals. With his heavy body, continuous shouting and even arguing with the playfellow in the field, Gustavo had no sympathy for many people. Yet, “talent” capacity helped Gustavo delete bad sides and become valuable of V. Ninh Binh. Upon continuous goal scoring in each match, Gustavo not only made Hoa Lu ancient capital’s fans happy but also they remembered him by the way of “unique” celebration after each goal. For example, after scoring a goal to SLNA’s net, Gustavo had “cutting” action upon his playfellows shared happiness or induced the team to form a ship, both cheering and rowing in the field. Ninh Binh Stadium in the end of the football season was suddenly crowded. Many people wanted to see Gustavo’s scoring goals and relaxing by his humorous celebration actions. Recognizing the innate talent of Gustavo and no wanting to loss this “valuable”, V. Ninh Binh leaders renewed the contract with this attacker for 1 year (in late 2012).