The high results that the Vietnamese 15-year old students gained from the PISA tests is the Vietnamese pride and joy. However, this has also made Vietnamese embarrassed: why is Vietnam still poor, though its people are very intelligent? 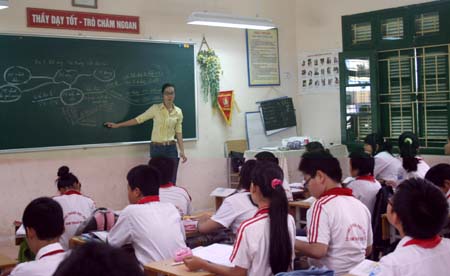 Vietnam, the poorest country among the 65 countries which attended the OECD launched PISA tests, has caused a big surprise to the whole world with its high achievements.

Vietnam ranks the 17th among the 65 ranked countries and territories. It ranks 8th in science with 528 scores, 17th in math (511 scores) and 19th in reading comprehensive.

The high results gained by Vietnamese students have been reported by international newspapers as miraculous achievements.

Daily Mail, while comparing Vietnam with the rising star, emphasized that Vietnam ranks the 17th, or above the UK, even though it spends much less money on education than the UK.

There are 41 students in every class in Vietnam, which is a sneer at the viewpoint that the education quality depends on the ratio of students per teacher.

Andreas Schleicher, who was in charge of assessing the PISA test’s results, also admitted that the UK’s spending on education is 14 times higher than Vietnam’s.

However, the high results at international competitions make Vietnamese feel embarrassed. They cannot explain why Vietnamese intelligence quotient is very high if compared with the world’s, but Vietnam still lags far behind other countries in the numbers of international scientific research works and inventions.

“I don’t know if we should be joyful or feel sad about the PISA test. Vietnamese are very clever, but Vietnam is still a poor country,” phuhai_trinh@…, a VietNamNet’s reader wrote in his email. “We are more clever than others, but we expect the aid from them.”

He has attributed this to the difference in the culture between Vietnam and western countries. Vietnamese students, like other Asian students, always have to learn heard to receive gigantic knowledge. Meanwhile, western students strive for the creativeness.

Hung@gmail.com, an overseas student in Australia, agreed, saying that Australian students have to deal with quadratic equation in the first year at a university. Meanwhile, quadratic equations can be solved by Vietnamese 9th or 10th graders.

Therefore, Hung felt the first-year curriculum at the university was very easy. However, he met problems later when working in a team, which required high creativeness which is what many Vietnamese students lack.