The state’s funding needs to be addressed properly in order to avoid waste and injustice for students, especially poor students. 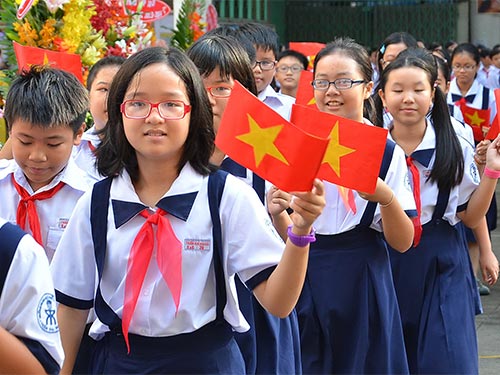 Shortly after the government called for the education socialization, a lot of private schools have been established, thus helping ease the state owned schools’ overloading.

However, the private schools, which deserve credit for helping improve the national education, do not receive the encouragement from the State.

According to Pham Thanh Thuy, the owner of a private nursery school in district 7 in HCM City, under the Decree No. 53 released in 2006, non-state owned schools could enjoy the corporate income tax of 10 percent, lower than the average rate of 25 percent.

However, under the Decree No. 69 which was released two years later, nursery schools can only enjoy the tax incentives if they have the land area of 8 square meters per child at minimum.

Of course, many schools could not meet the requirement in the context of the limited land fund. As a result, they were investigated by tax officers and asked to pay tax arrears.

“The inconsistent policy has made nursery schools suffer. They have no other choice than raising higher tuitions. This means that nursery school children also… have to pay tax,” Thuy said.

Hoang Thi Hong Hai, former Head of the Tan Phu district’s sub-department, said the state budget is not big enough to feed both the state owned and non-state owned schools. However, Hai believes that it is now the right time to think of providing financial support to private schools as well.

“All students have the same right for social welfare,” Hai said.

Agreeing with Hai, Phung Thi Nguyet Thu, former Deputy Head of the Mac Dinh Chi High School in district 6, HCM City, said: “There is no reason to exclude private schools from the list of schools that can receive the state’s investments.”

At present, private schools’ students are automatically considered as coming from well-off families. However, Le Van Linh from the Thanh Binh High School in Tan Binh district, HCM City, has denied this.

Linh said though the school sets “very reasonable” tuitions, a lot of students still are still many months in arrears with their tuitions.

He went on to say that if the government accepted to prop up VND4 million a year for every student, this would greatly help ease the burden on parents’ shoulders.

Budget for allocation to be adjusted?

At the Hoa Lan Nursery School in district 1, children don’t have a school yard to play at break time, while teachers don’t receive bonus or allowances on Tet or holidays.

Le Thi Kim Van, former Head of the Hoa Lu Nursery School, thinks that the state should allocate its money to the right addresses and give big support to poor schools.