Oseni was the focus of this game. He not only scored the two goals, helping BP Gia Lai win the final 2-0 against V.Ninh Binh but also saw red in the second half, leading the Wood team to the lack of player in the last minute. 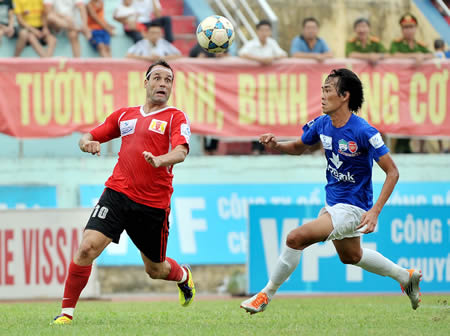 With the absence of famous striker Evaldo due to injuries, HA Gia Lai trusted more on the offensive line, especially another foreign striker Oseni who did not make the mountainous city team disappointed by his shining form.

After 5 minutes of the match, the Wood team took the lead thanks to Oseni’s goal. Catching the pass from Bui Van Long, Oseni accelerated pass the V.Ninh Binh’s defense before technically passed over goalkeeper Van Hung of the away team to give HA Gia Lai the lead.

The early goal helped the Wood team easy to play. They slowly kept the ball in their home side before suddenly accelerating to grasp any chance, which surprised V.Ninh Binh’s defense.

It must be added that it was a very different image of HA Gia Lai in comparison with previous year when Boss Duc’s team had had no rushing attempt but always dangerous when putting the goal up front.

Meanwhile, in the other side of the battle line, V.Ninh Binh also made their best effort to do well. After 22 minutes, receiving a cross from the right side, Moussa Sanogo had a quite dangerous header but HA Gia Lai’s goalkeeper promptly swung to stop the ball.

After 35 minutes, the Hoa Lu team had another dangerous shot. With a shot from 14 meters out, Peter wasted a chance to level things up after a volley past the crossbar although HA Gia Lai goalkeeper Akpan mostly missed it.

Hoa Lu fans must have felt regretted as HA Gia Lai increased the lead to 2 goals to nil shortly thereafter. After 41 minutes, Tran Vu passed the ball to Oseni who twice won V. Ninh Binh’s defense in the race before defeating goalkeeper Van Hung by an angled shot, giving the Coach Choi Yoon Gyum’s team up to 2-0.

Not over yet, at the last minute of the first half, Bui Van Long of the home team also missed a good chance to score. In this attack, the HA Gia Lai player had a too light shot at a 3 meter distance from a mostly empty goal area, which help V.Ninh Binh promptly stepped backward and stopped the ball right on the goal line.

With 2 goals difference, HA Gia Lai actively gave their opponent precedence in the second half when the Wood mostly had counter attack by passing the ball to Oseni who seemed to be effective until after 57 minutes when he  was sent off.

It was a very uncomely situation of Oseni. HA Gia Lai player had rather unnecessarily crude handball, which led to his receiving the 2nd yellow card then being sent off, pushing the Wood into the situation 10 against 11 in more than 30 minutes remaining.

Fortunately for HA Gia Lai when in that period, V.Ninh Binh still proved quite uncomely before any chance, plus the goalkeeper Akpan of the home team played excellent that help the Wood keet the net clean.

Among the missed opportunities of V.Ninh Binh, most notably was the case of Timothy with a shot skyward after 83 minutes, though the Nigerian player was only 5 meters away from the mountainous team’s goal with no attachment.

Before that, at the 68th minute, Dinh Van Ta from the ancient capital Hoa Lu had an extremely dangerous free kick from about 20 meter distance, but goalkeeper Akpan from HA Gia Lai was as quick as electricity to swing to save the score.

With a defeat 2 goals to nil over V.Ninh Binh, HA Gia Lai had the 5th consecutive wins and back to the 2nd spot as V. Hai Phong would play 1 day later in the 10th round.

Arsenal players were excited to get acquainted to My Dinh stadium